Considering 2.7 million ANC is in agreement suggests otherwise. This is decentralization in action.

If you can’t accept opposing opinions I would suggest Cefi (Celsius/Nexo) might be better suited for you.

Reducing the EthAnchor APY to 0% is a clean solution to the poll that doesn’t single out any entity.

If you’re looking to point a finger, have a look at the three that are pointing back at you…

We are both entrenched in our opinion here. The only thing you and 2.7M anchor seem to not be able to understand or comprehend, is that your proposal (if it passes). Can’t be executed.

I don’t have any issues with you sitting there slamming Wonderland. But your proposal was not thought out, it’s rooted in emotion and has no plan or path of execution.

Nexo or Celsius is going to be the only thing left if proposals like this continue. It’s clear that if systems are governed by voters who have no plan or ideas on execution, it will fail.

We are both entrenched in our opinion here. The only thing you and 2.7M anchor seem to not be able to understand or comprehend, is that your proposal (if it passes). Can’t be executed.

It can be easily executed by reducing EthAnchor APY to 0%.

This proposal doesn’t blacklist anyone specifically. All users are welcome to bridge over their UST directly into Earn.

I have no issues with Wonderland or any of those accusations. I am more interested in restoring health back to the protocol.

Honestly, me too. We’re coming at it from different angles here.

I can only go off things previously mentioned, regarding your issues with the Wonderland team.

My only concern is when governance decisions aren’t backed by data. Is there any modelling that suggests this governance proposal will improve long term health of the protocol?

I think the answer is no.

If that 700m leveraged, was replaced by 700m of straight cash from Orion or another protocol, the long term health is still in question. Resources should be devoted to addressing the scalability issue, because all the degenbox did was bring this to the forefront. It proved Anchor wasn’t scalable and couldn’t handle the volume. That is the only issue here regarding long term protocol health.

I think we can agree the Degenbox created a lot of non organic demand due the promotion of 112% APY using leverage.

The other issue is these EthAnchor deposits bleeds APY out of the system and returns nothing back when we were already drowning in deposits.

The degenbox locks that UST back in Ethereum. It cannot move out to explore and populate other areas of the Terra ecosystem.

I can’t see why anyone would object to this proposal given the clear damage it has done to both the health and reputation of LUNA, Anchor and UST. The stats have been pretty clear.

I respect your position. If you’re postulating that EthAnchor drains yield reserve and offers no incentivisation at the moment to borrow- then I agree. The issue is not MIM, but rather the wider pressure on earn- all take no give. But i again do think that’s why increasing incentive or borrow volume is the way forward.

These massive earn pressures must be subsidised by mirrored borrow.

I think the initial proposal could have done better in communicating these thoughts, and that perhaps it should have been a suspension of EthAnchor until Anchor was in a position to subsidise cross-chain earn rates with cross-chain borrows.

And what you want to do to stop others from creating their own EthAnchor ? You don’t need to write it ! its already out there because it is open source !! just setup it up it could run in a few hours after TFL closes their own. You keep demonstrating here that you don’t understand the tech behind blockchain nor do you understand why it is open and permission less.

The big issue here is that we have a poll that completely vilifies Abracadabra, but a thread that is looking at this from a health and sustainability perspective.

I wish that person could rewrite the poll in a less accusatory manner and redirect discussion to the thread here.

They are not going to rewrite it. If EthAnchor APY is set to 0%, Abracadabra positions will be unwound.

If you look at the MIM peg it’s actually in their best interests right now. We are just assisting them at a time when they need it.

Sure anyone else can do what they want, but good luck sourcing over 1 Billion UST without sponsorship from TFL.

You have just demonstrated you have no clue what’s actually going on here.

And again ETHAnchor is a software, a smart contract on the terra block chain and one on the eth block chain. I can change the address of those contracts at any time , deploying a new contract takes one block time of terra! How do you block them ? how to you set the APY to 0 if not setting this apy to 0 for every address on terra !!! You ask for things that can be bypassed faster then you can blacklist them.

Btw. I get the feeling you accurately know how stuppid it is but just need to generate FUD for those that want to believe you. Here is the MIM price feed they are doing fine… MIM / USD price today | Chainlink

This thread and poll is looking to achieve two things.

So is it correct the APY cannot be set on on EthAnchor? I have seen previous discussion that it is.

If not, we know for sure it can be switched off.

The fact is Terra and Anchor positioned themselves as a reliable safe haven for stable assets. This is what is being sold and built upon by many upcoming apps that bridge UST and Anchor to the real world like Alice, Kash, etc.

I doubt most normie users would touch these apps if knew they knew that under the hood TFL is partnering with degen ponzi artists like Daniel Sesta and his lowlife criminal associates to allow 10x recursive looping thereby creating serious increased systemic risk for their assets.

The two things don’t go together. The risk is much higher when people are playing degen shitcoin games with this.

A couple of primers about the whole Abracadabra saga with a heavy dose of speculation.

For those wondering how this all affects us it’s unclear. However, MIM is currently over 40% collateralized with UST and there is over $700M worth of exposure sat parked in Anchor. 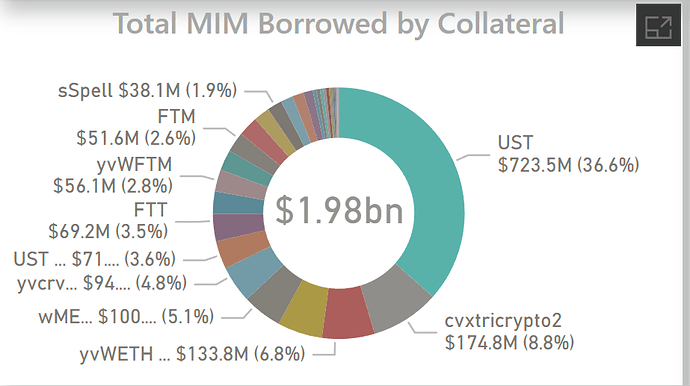 HI,
Another upcoming protocol that might be less controversial than Abracadabra is
called “The Standard Protocol” https://thestandard.io/
(Not yet live, so below are some assumptions)

I believe The Standard Protocol would let a user deposit aUST collateral in their smart vaults and borrow a stable coin (initially sEUR, an algorithmic/collateralized stable EUR) that can
be traded for UST and looped like Abracadabra/MIM.

I haven’t tried MIM myself, but, for some reason, The Standard Protocol approach seems like
it would be something I would do. Perhaps not 10x looping, but perhaps 3-4x?

Hopefully a way of making Anchor more robust to larger inflows of depositors will be found!
Dirani

This poll is absolutely right to be here. We need to get rid of unethical activities in the system.

The poll seems like an emotion driven knee jerk reaction to the recent price action of Luna.

Saying that EthAnchor offers zero value to the protocol is beyond preposterous. It is one of the fundamental infrastructure for Terra’s interchain money lego roadmap. Orion on Eth relies on EthAnchor.

Listen, I hear your feeling. But lets move cautiously and definitely don’t “act first and ask questions later”. Once things get passed, its often hard to unwind.

Orion on Eth relies on EthAnchor.

Can you provide one single benefit Orion Money brings to Anchor?

How is this a kneejerk reaction since we’ve been discussing this exact issue unfolding for almost 2 months? And yet here we are.

Everyone that is voting to disable MIM has a massive misunderstanding on how anchor works.

If this proposal passes anchor will have to be rewritten to allow blacklists of certain wallets interacting with it which will stop ethanchor from depositing directly but wont stop abracadabra if they just buy aust on the market they will still get the 20%. If they want to stop degenbox from ever getting the 20% then anchor will have to be rewritten completely to change how it handles its interest “payouts” from just appreciating aust to keeping track of how much a wallet has earned and then sending that to the wallet when they withdrawal. At that point aust will no longer exist and wreck anything using aust such as mirror and kajira coming up. There is no way to really stop one person/wallet from earning 20% without everyone losing 20%. Hell they dont even need to go through ethanchor they can just bridge to a smart contract on terra that monitors its balances for UST and deposits it for aUST and then monitors for aUST and sends it back to abra. There is 0% chances of anything being done and thats just the way it is. There is also nothing wrong with what abra is doing there are literal thousands of people leveraging using anchor but on the borrow side like i am to get access to more luna. Is that also “illegal” even though its how almost everything leveraged works and has always existed in every single market. Theres also nothing stopping from a abra alternative from spinning up doing the exact same thing.

Theres also nothing stopping from a abra alternative from spinning up doing the exact same thing.

Ok, you might have not been following this, but this goes beyond just ‘let’s disable MIM or let’s block EthAnchor’.

This issue needs raising with Terraform Labs. What their involvement has been and why? Who have they been working with? Why they’ve been embezzling hundreds of millions of UST indirectly through the Degenbox with disregard for systemic risk? What are their plans to back out of this now it’s clear they’ve been working with known criminals and there’s contagion building?

People are voting for this poll since they are worried and frustrated and there’s no other way to get their voice heard.

Do we just sweep this under the carpet and hope that the $1.4B of Abracadabra exposure doesn’t suddenly get rugged?

Hey all, just joined because I believe there is another point to all of this that a lot of people dont seem to be seeing. The Abracadabra UST leverage farm is a very convenient way for Terralabs to liquidate hundreds of millions of UST without hurting the peg a lot and they have a direct incentive to keep that one going for as long as possible. How are they doing it? Happy that you asked. Back in September Terralabs announced “Project Dawn” to help cover operating costs by releasing 3 milli…

Anyone who would like to be in business with cast of lowlife scumbags and criminals outlined in the videos above is out of their mind.

We are talking about a safe haven stablecoin ecosystem. If you want to play high risk degen/ponzi/massive leverage games then go do it, don’t put the rest of us at risk.