Do we get the data then propose/vote or do with vote first?

Modeling is being done, should be done by end of week. So far the data is looking good.

That’s awesome! Once modeling is done. What would be an ETA till voting starts?

ideally, next week if the data can all come in and be properly looked at this week. If not, the following week after that.

As proposed, raising LTV to 80% will increase collateral capital efficiency. This is not only needed to generate more loan revenue from collateral but to also make the borrowing side more comparative with other well-established lending protocol’s LTV ratios. Moreover, increasing the LTV could also encourage more people to take out loans due to capital efficiency.

The two major risks for doing this are:

Mainly the liquidation queue has tightened significantly since May with the launch of Kujira. There are also several others such as Lighthouse Defi launching to help with diversification of the queue and adding more liquidation bid liquidity.

During the 38% drop in the LUNA price on Jan 21 & 22nd (and 48%+ from top to bottom so far), liquidation premiums never topped 10% demonstrating greater liquidity depth in the liquidation queue 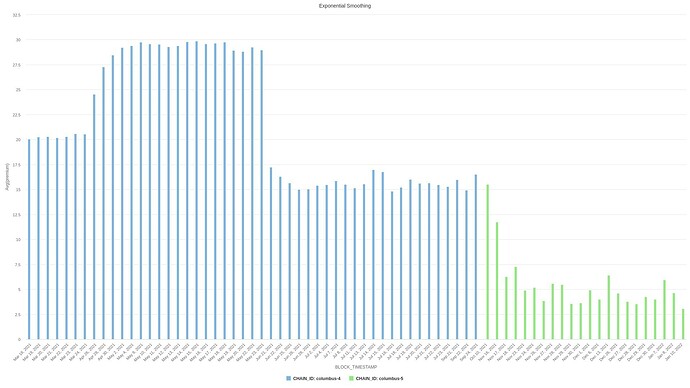 This demonstrates the major strengthening of the liquidity bids and strength of the mechanism that should only get stronger over time as more demand for these products liquidation bid platforms increases.

In the past, bLUNA-LUNA spread substantially widen by ~ 46% during the May crash when luna dropped over 77%. However, since then the spread has developed built significantly more liquidity: 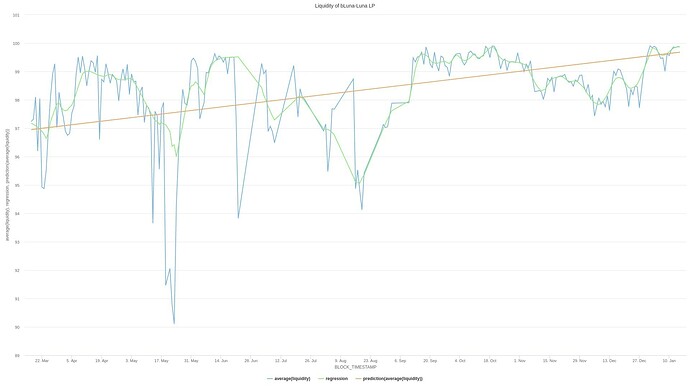 Despite a 38% drop in LUNAs price on Jan 21 the bLUNA-LUNA spread widen by less than 6%. Looking at a synthetic pool liquidity index also shows the trend of liquidity depth of the pools is moving in the right direction. More importantly, there is pool diversity with listings on TerraSwap, LOOP, and Astroport that collectively hold over half a billion of combined TLV in the pools.

As more liquidity forms around the Astroport and LOOP bLUNA-LUNA pools, this spread will tighten more to further limit the liquidity risk.

Side note, bETH LTV will stay the same since the depth of liquidity on the bETH-ETH pool isn’t deep enough to even warrant deeper research.

On the back end there will have to be some changes to how combined collateral loans will be calculated, ideally now on a minimum borrow ratio. This was something that will need also to be figured out for the new v2 borrow model and cross-chain anchor because it will onboard new collateral assets that have different LTV ratios.

Thank you for the data, great work the charts are easy to understand. Love to see the data pointing in the right direction for a higher ltv!

Not clear to me if the poll is asking to simply set liquidation threshold at 80% and leave max borrow at 50%, or are we changing the max borrow as well?

Haven’t read all the posts here, but LUNA is a lot more volatile than ETH or BTC. So its LTV limits should be significantly more conservative than whatever the market convention is for BTC or ETH.

ETH has an annualized implied vol of 90-110. I’d guess if LUNA had a liquid options market it’d be a 140 at least. Therefore, the current settings are actually inline with market LTV for BTC or ETH, vol-adjusted.

Thats up to each borrwer to evaluate and decide. What matters is making sure the protocol is safe.

He was asking what will the new safe LTV/maximum borrowing limit one can get.

That’s not the only thing that matters. Another thing that matters is that the overall user experience is roughly inline with expectations. If people borrow up to something not too far off the max and get blown out during high volatility “but the protocol is ok”, the user feels pissed off & scammed.

If people borrow up to something not too far off the max and get blown out during high volatility “but the protocol is ok”, the user feels pissed off & scammed.

That’s a lie, they will simply know they fucked up real bad and take it as a lesson. Plus there hasn’t been any fundamental change in how borrowing works. People will simply be able to borrow more with the same risk exposure they had at 60% LTV.

God… people use 100x leverage on exchanges like binance and I haven’t seen any mass exodus occur yet on such exchanges… If anything a little warning sign could be added to stop stupid people from doing stupid things they don’t understand. But I highly doubt the average anchor borrower is like that…

That doesn’t improve anything. It just discourages borrowing, which by the way is the exact opposite of what the protocol is trying to achieve, which is incentivizing borrowing by making it, easier, safer and more capital efficient…

Fair point. But if you are going to be rewarded for borrowing with ANC tokens, then something that helps the token price would encourage borrowing.

If I look at the borrow rate at -2%, but the ANC price is constantly falling, then that rate is going to continue to get worse, and the borrow case doesn’t look as strong with ROI. I also know these rewards are not forever, and the protocol does need to stand without them, but I don’t know that we are there yet.

The good news is that Kuji Orca seems to help this in reducing the discount levels that are actually hit.

When they incorporate AUST, I think you will have a lot more people willing to liquidate at lower levels and it should never climb the ladder that high.