The only downside is for looped degens. Limiting those is long time overdue, let’s see how Do Kwon’s scammy friend Sesta likes it

Looking at the MIM-UST curve pool it seems that partnership is well and truly over.

This suggestion gives TFL a clean break from those guys without needing to engage in an act of defi war. All thanks to a community idea and decision.

Sounds like a plan. Will save the protocol about $410,000 per day in pointless degen interest.

@bitn8 what do you think?

It’s a solid idea but I think more solidarity is forming around getting the dynamic rate done first, then looking at something like you laid out, ideally based on ve-ANC.

The proposal from mariano is truly the best of all and manages to strike just the right balance. IMO it should be implemented ASAP, before anything else and certainly months before any changes to the APY (variable or other). Than sooner it’s in place, the longer the yield reserve will last, giving more time to ramp up lending and work on a more sustainable APY long term. It’ll make Anchor cleaner and stop the yield drain, with no real impact on usability. Simply put, it’s what Anchor needs right now, from multiple perspectives.

Here’s how the team can play it.

This would have an immediate positive impact on the yield reserve decline as it will take time for people / protocols to migrate over should they wish to.

Perhaps a2UST could be created by staking aUST to a specific contract, thereby making it immovable, but with higher yield. I do think for a2UST there needs to be some form of capital controls (lockup periods, etc.), otherwise this can be easily circumvented by a different protocol minting a wrapped, transferable version of a2UST.

This could fit the demand for the 2 user types of Anchor, aUST positioned towards DeFi applications with composability in mind and a2UST facing towards regular depositors such as third-party applications (which they don’t need composability)

aUST yield would still need a degree of yield flexibility, for Anchor to fluidly react to long-term market changes. This can go hand-to-hand with the dynamic Anchor rate.

Perhaps a2UST could be created by staking aUST to a specific contract, thereby making it immovable, but with higher yield

I’m not a coder but as far as i know one can code the token to be non transferable and only be able to interact with a specific contract. At least I know it works on ERC-20 tokens. But still that’s one way to solve it!

Yeah, I kind of have mixed feelings about that because in DeFi everything can be tokenized. Even locked up tokens can be tokenized, but the fact that they are illiquid does have the advantage of being able to acquire a bondlike behaviour on a secondary market so that’s a plus.

I think a lock up period defeats the purpose of making it non transferable and actually makes it a disadvantage as people will not be able to trade their tokens on a secondary market.

Now my second thought is that if it can’t be transfered, it can’t be deposited in other smart contracts. And if one wants a “wrapped” version it can only be done by a centralized entity which holds the private keys to said wallet. If that is the case it could be rugged and wouldn’t get much attention from the public.
Now if somebody where to be able to use a smart contract to deposit and withdraw. Me next question is: Is there any way that the token could be prohibited from interacting with other smart contracts?

This can go hand-to-hand with the dynamic Anchor rate.

Step 1: Once we move to 10% APY deposit rate, UST outflows will increase. Luna will be minted to maintain UST peg. Luna price drops, and total deposit & borrowing on Anchor drops.

Step 3: Yield reserve depletes even faster. Now we have to move to 5% APY deposit rate.

In truth, there is no substantial usage for UST except for depositing on Anchor to get 20% APY (ie. Terra = Anchor). Once we take that away, everything falls apart. Mirror is a joke since the mAssets do not even track the real-life asset prices closely. All other alts are just pump and dumps.

Step 1: Once we move to 10% APY deposit rate, UST outflows will increase. Luna will be minted to maintain UST peg. Luna price drops, and total deposit & borrowing on Anchor drops.

Nobody is proposing a move to 10% apart from the current composable aUST version which is being used ‘by some’ to excessively drain yield.

This is the type of thing (below) that is the target of the aUST / a2UST amendment. 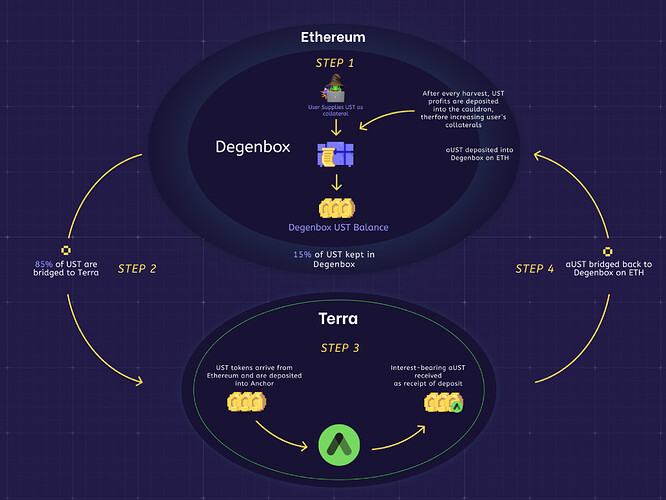 Anchor protocol’s yield reserves will continue to be consumed if the protocol itself is not competitive. In the current situation, this is more of a suggestion to simply “lower interest.”

This is far from a fundamental solution.

However, I agree that it is better to buy time than to spend the yield reserve without any plans.

That may be true. But if so then we have a much bigger problem on our hands and whole of anchor is a huge ticking time bomb, as a rate reduction is inevitable.

Could I have your input on a suggestion I made a while back? Suggestion: ANC, aUST and getting depositors involved

As mentioned. I am trying to hold the line here for ongoing initiatives and merging the best interest of the community. Your proposal is another well thought and research idea that holds a lot of merits. There is now more than 5 of these floating around - I’m losing count lol - with different ways of addressing the earn side issue, all with similar targeted outcomes but different means of getting there. .

I am trying to tie this all together by saying the best approach is to merge this idea with the ve-tokenomics that are coming and be a bit patient for that and the dynamic earn rate to take affect.

Then we can explore getting all these different ideas on the same page. I think the one that makes the most sense is the one @josedelphi lined out base on talks from AMAs and other research - [Proposal] veANC: Evolving Anchor Tokenomics - #50 by josedelphi

We may want to look at this from the perspective of the cost of UST adoption as well. How much is Terra/LFG willing to pay (Anchor YR) to continue the growth curve in UST adoption?

Good point. Has anyone consulted TFL / LFG regarding the dynamic rate change?

Reading the rhetoric on Twitter it seems to point to them looking to maintain 19.5% APY for approximately 2 years. Given that there’s a clear incentive (yield reserve top up = more UST = LUNA price rise).

If the dynamic rate change is to be implemented then it’s going to need a comprehensive communication plan.

It makes more sense to chip away at the low hanging fruit to help alleviate the pressure on the reserve.

The community / TFL has litigated the issue here in the forum for months. I think we are really at a point where it is obvious that the subsidy is here to help UST grow - this is fine so as long as Luna price keeps up and the YR is topped off. If that’s the model, that’s the model. Over the longer term, the dynamic YR can be implemented to slowly bring Anchor back to reality once UST is circulating in other use cases…hopefully not levered aUST pools etc. HA!

We should aim to fix what we can (yield reserve drain) without impacting organic UST growth. Some examples :-

@narco78 I dont believe requiring to buy ANC tokens to get 20% yield will slow down adoption.

First because even if 5% ratio ANC to UST deposited is required it will be the equivalent to lose 1% on the 20%. Nothing else beat 18% auto compounding so I would personally still choose Anchor. And then the ANC will also appreciates like others crypto. Since Anchor protocol is successful, ANC token will also be and the appreciation on your ANC could even be greater than the 20% on your UST.

Thirdly, that ANC could generate staking incomes the same way like other assets like bLuna, bEth does.

Even if 0.1% ANC to UST deposited was required, it will not affect much the yield of 20% received and provides all the advantages named above.

I understand there is technical limitation but that would be nice if the anchor development team could offers possible choice and then have the community vote for what they prefer.

I have yet to see any evidence that artificially driving up the ANC price (via forced holding requirements) will have much impact on borrowing.

Requiring users to buy, hold, stake or do anything with a volatile token is a net negative to UST adoption. No question about it.

The only people who benefit from forced ANC requirements are those who get in early and at low price. We are not Nexo or Celisus (a for profit business) so it makes no sense for a entity to benefit from such a proposal.

If the ANC token needs a boost in price, a flat % withdrawal fee for ANC buy backs is a far more fair and simple way to achieve that goal. The protocol can then own those tokens rather than the user and can be use to support borrowing needs after emissions end.